Drama based on Rani Shailpriya 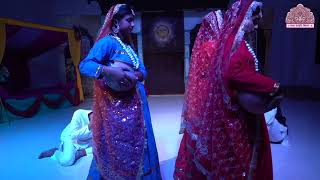 There is also a fair in Chamba district of Himachal Pradesh, which is only for women and children. The story of the sacrifice of Queen Sunayana of Chamba is seen in this fair. In the sixth century, Queen Sunayana of Chamba was buried alive in the ground to quench the thirst of the subjects. It is also mentioned in a copper inscription by Yugakar Burman, son of Sahil Burman. It is said that at the time of establishment of Chamba city, there was a lot of water problem there.

To overcome this problem, the king of Chamba ordered to bring water from Sarotha Nala to the city, about two miles away from the city. The construction work of Kuhal was done on the orders of the king, but despite many efforts, water did not come in it. According to the legend, one night the king was heard in a dream in which it was said that water will come in Kuhal only when the queen or a son is buried in the living ground at the original source of water.

The king became very worried about this dream. Meanwhile, when Queen Sunayana asked the king the reason for the trouble, he told the whole thing about the dream. The queen happily spoke of sacrificing her for the sake of the subjects. Although the king and the subjects did not want this, but the queen did not give up her stubbornness and convinced everyone to be buried in public interest.It is said that when the queen went to the original source of water, many slaves, kings, sons and thousands of people also accompanied her. A big grave was prepared on the kuhal being brought from Balota village and when the queen entered the grave with decorations, the whole valley was drenched in tears. It is said that as soon as the soil started filling up from the grave, water started rising in Kuhal also.